What's on your mind?

For years there have been 2 articles compiling the events of 60 Seconds, List of Events and Events (60 Seconds!) (formerly Events). For a long time I've been wondering what should be done, should the articles get merged? Should one of the articles be converted into a page documenting 60 Seconds!: Reatomized events? Should one article just explain what events do and the other transcribe events in 60 Seconds? I'm very curious on what everyone here thinks is the best course of option, as I'm unsure.

Ok so i started out with Ted, Timmy, and Dolores (i didn't get Mary Jane in time). On about day 40-ish i sent Dolores out to search for supplies and the day after that i sent Ted to look for his car bc he found his car keys. They were gone for a few days then the phone from outside ran so i sent Timmy to go answer it. A few days passed and no one came back for some odd reason. So i kept going on. Im on day 86 now and no one has came back and idk why.

Ok I was doing my daily couple plays today and I survived past day 111 and then it gave me an achievement. Since the number is 111 I think it’s a reference to fallout. Anyone know? I’m pretty sure there is a character in fallout named “Konrad” which the name of the achievement was: “Konrad Style”. It’s been forever since I played fallout though. 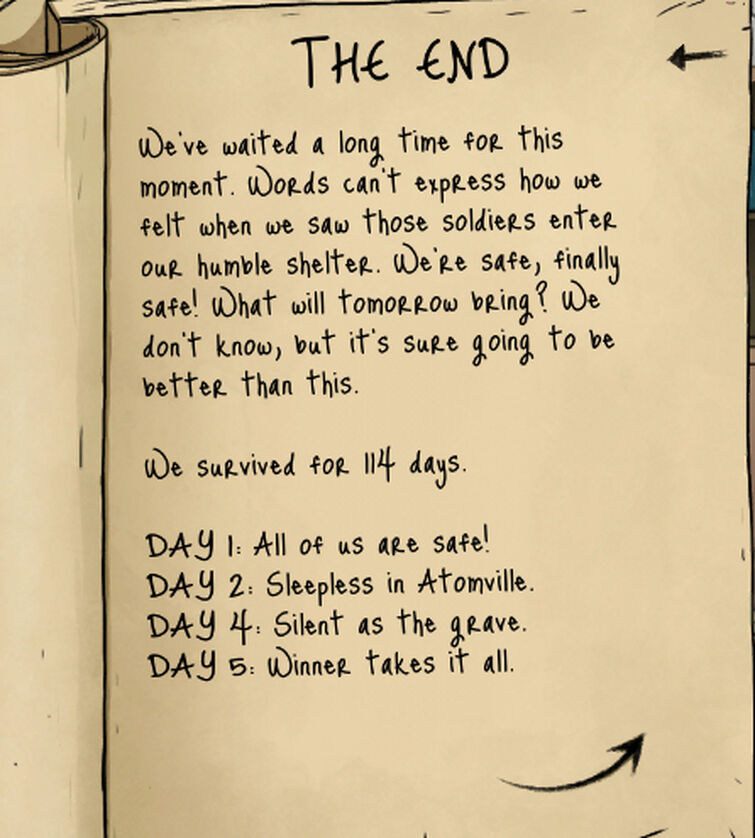 I have a really creepy theory. If you let the Mad Scientist in your bunker, it will say “Your Fate Remains Unknown” And a crashed spaceship on the end screen. This is really frickin creepy and I wanna get to the bottom of this.

So, remember how the Mad Scientist wants 4 Water or Soup? Well I think that something happened where the Water/Soup leaked into the engines and the spaceship crashed. So, you may have gotten the water. If the water did leak, this could be fatal!

The H2O reacted with the mechanics and it crashed. The truth is, the Mad Scientist only wanted the water to leak in and kill you! He’s not a Mad Scientist! He’s a murderer!

So, guys, do you think my theory might be true? Leave a Yes or a No.

title says it all

I`m starting a game. All OK. But when  it start there no text. I am launching it with wine on Ubuntu 15.10

(edited by A Fandom user)

Post any question you have about editing, creating, and deleting 60 Seconds! wiki pages, and I will answer them as soon as possible. Ask away!