Unknown
Emmet Ellis is one of the six main characters in the game 60 Parsecs!. When scavenging, he has the usual four inventory slots, and has 25 seconds to explore the area (the longest for any character). If not chosen in scavenging mode, he takes up two inventory slots and can be seen trapped in a tangle of wires.

Emmet is African-American. He has curly brown hair, a thin body shape, wears white shield glasses, and has an orange astronaut suit with yellow gloves and boots. Overtime, he will grow a brown beard, and his hair will grow out, too.

Despite his brilliant mind, Emmet has always been undervalued and misunderstood by his peers. Seeking scientific challenge - and to get away from his ungrateful job as a chemistry teacher - he signed up for the Astrocitizens Program, hoping this will be the place where he can finally earn the appreciation and respect he deserves.

Boost: Resourceful [You always manage to get something extra from choices and expeditions.]

Captain's Goal: Make five successful Intelligence attribute decisions.  (Show them what you got and get due respect as a scientist.)

Emmet in scavenging mode when you don't play as him. 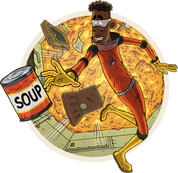 Promo image of Emmet trying to grab a Soup Can taken from Robot Gentleman's website. 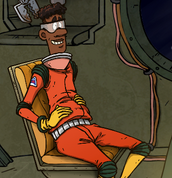 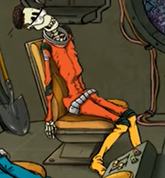 Emmet Ellis with his hair and beard fully grown out

The broken glasses Emmet is represented by when he dies.

Emmet as a bandit in the evil dog ending.

Emmet in the ending where you use the lighter to fix Sheila but you don't tell the truth to Dumbo.

Emmet in the ending where you successfully get rid of Sheila's feelings for Dumbo or make Dumbo fall in love with Sheila. 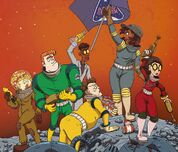 Emmet Ellis and the rest of the crew featured in the Mission: April One DLC announcement. 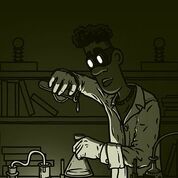 Emmet, along with Maegan and April, featured in Baby's special mission ending.

Emmet, along with Baby and April in Maegan's special mission ending. 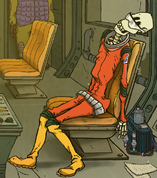