The Journal is a book on the bottom right corner of the shelter, appearing in 60 Seconds! and 60 Seconds! Reatomized. It tells the player about all events, all characters' status, rationing, preparing for expeditions, etc. It is the only way to finish a day.

The Journal looks like a yellow book with a pencil on it. The inside looks like a old journal with dark words. The paper is brownish-orange, and sometimes stained and has sometimes drawings on it.

The journal ends up ripped through with a pencil and left outside the fallout shelter's door, but only if the player gets any driven away ending.

Somehow the journal tells the player about Ted/ Dolores' death even if they are the last person in the fallout shelter.

A journal entry with the event mentioning Mr. Freeman.

Another journal entry, and also a reference to Fallout, in which the main character leaves his vault in search of a replacement water chip.

The ration page that appears all days. 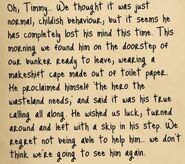 Entry of Timmy leaving the shelter if left insane for too long.

Another entry, and also a reference to the infamous quote "The cake is a lie" from Portal, a portal-based game by Valve. 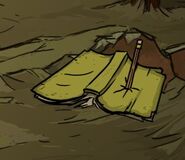 The journal icon in a driven away ending. 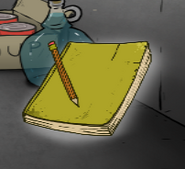 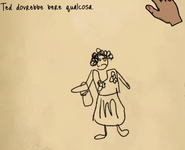