Ted, flashlight, soup,
Mary Jane McDoodle[2] is a main character in 60 Seconds. She is the daughter of Ted and Dolores and Timmy's older sister.

Mary Jane is a pale, chubby girl with black hair and bangs. Her birthday can be an event in the game, the player can give her the Deck of Cards, Bug Spray, or a MedKit/First Aid Kit. The best option is the Deck of Cards. If the player runs low on supplies and doesn't give her Water Bottles or Soup Cans, she will run away into the wasteland to become a highway woman and the game will mark her as dead. She can also play the tuba, and it's possible to send her out in the wasteland overnight to practice.

She can become a mutant if she is bitten by a mutant spider by doing nothing about them (using boy scout book can also produce same effect), the player does nothing about bugs (the event triggering it will happen with the talking roaches incident, boy scout handbook on left side, bug spray on right side of choice screen), or if the puddle of green goo isn't cleaned with a Boy Scout Handbook, Suitcase or Gas Mask. This means she will not require Water Bottles to survive, but she will require more Soup Cans as a result. She also becomes immune to Sickness, Tiredness, Insanity, and becoming Injured (unless you are playing 60 Seconds! (the original). The only way she can be injured is by secret agent mission, being hurt beforehand, or being attacked by a crocodile in the noise event with axe and flashlight as choices. If Mary Jane mutates before the family is followed from their expeditions, the bandits will still take control of the area, but will never attack the family as long as she is the only character to ever exit the shelter. This mutation is a feature exclusive to Mary Jane.

Mary Jane is a female character with black hair and pale skin. Her hair is styled in a high ponytail, held up with a pink hair tie. She has a white shirt, a navy blue skirt, white socks and brown shoes. It's worth noting that she looks very similar to Ted, whereas Timmy primarily has Dolores's features.

When a mutant, she has purple skin and has rips in her clothes, and her limbs will appear unevenly proportioned in size. She will also have a giant underbite and a hump on her back.

When insane, she will pose like a chicken and stand on her seat, except from when she's Tired. Mary Jane's 3D model (appears when scavenging) shows her playing a tuba outside the shelter and she sometimes makes a tuba sound.

Find diary in the scout guide.

Read it: You end up regretting it, as what you see in there is... disturbing.

Don't read it: She thanks you and burns the diary.

When Dolores found out Mary Jane couldn't spell 'antiestablisharianism', she was furious. How about getting her some homeschool lessons.

Mutant Mary Jane doesn't require any water to survive so it can be very good if you run low on water. 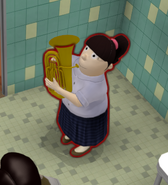 Mary Jane finding a can of soup in the 60 Seconds! DLC countdown. (8) 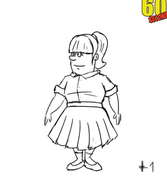