Yes. Can cure sickness or injuries.

Yes. Can be taken by Merchants.

Bathroom, Kitchen.
The Medkit (also known as the First Aid Kit) is used to treat a member of all his/her injuries and sicknesses.

During Scavenge Mode it takes up 2 slots during scavenging. The Medkit is extremely likely to be found in either one of the two bathrooms or the kitchen.

It can also be brought along as expedition equipment in scavenging to prevent harm from the person that brings it (doesn't protect against death). It gets consumed after the expedition if used. In addition, it can be used to help the family sleep better (prevents Tiredness). It can also be used to heal Pancake during his 4th time returning or for the birthdays of Mary Jane and Timmy.

Flames happen in the shelter and the player is chosen to save a First Aid Kit, a Radio or a Boy Scout Handbook. The unselected items will be damaged. Like most destruction events, this event tends to happen early in the game, usually in the first two weeks. 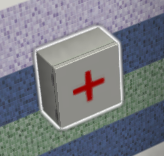