Map, Water Bottle, a Soup Can, and Gas Mask.

Theodore "Ted" McDoodle[3] is one of the main characters in 60 Seconds! and 60 Seconds! Reatomized. He is the husband of Dolores and the father of Mary Jane and Timmy.

Ted is 1/2 of the playable characters in the scavenging section of the game. If Ted fails to reach the fallout shelter in time, he will dive to the floor, and the player will be given the "The End" screen. This happens even if all other family members got into the shelter on time.

Ted has 4 weight slots to hold items when scavenging. Some things take up multiple weight slots, such as family members, the rifle, the suitcase, and the axe.

When Scavenging as Dolores, Ted will take 3 slots to carry, just like Mary Jane and the Suitcase.

Ted is American, with black hair and is slightly overweight. He obviously appears to age, as overtime his beard and hair grows thicker and longer. He wears a white shirt, a swamp green overcoat, a swamp yellow tie, and gray trousers. He rests his head on his left arm when he's not tired. When insane, a sock puppet will appear on Ted's left hand (it will have a stitch if Ted is also fatigued and will have bandages if Ted is also injured), and it will eventually convince him to leave the shelter. When dead, he will be a skeleton slumped over the table. In the 60 Seconds! promo, he wears a white shirt, brown pants, and black shoes, as well as wearing a chef hat and a white Apron. 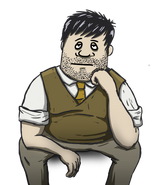 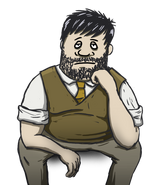 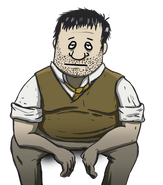 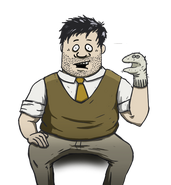 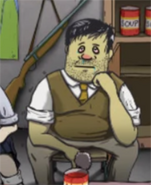 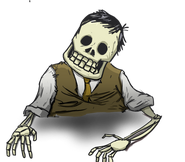 Ted's corpse as a robot.

Ted opening the door to a mutant in the 60 Seconds! DLC countdown (10).

Ted, Dolores and Timmy hearing noises from the walls in the DLC countdown (11). 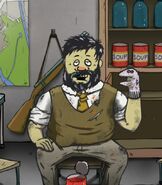 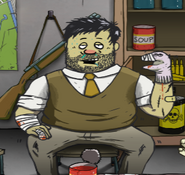 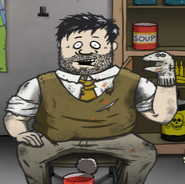 Ted failing to get to the fallout shelter in time in the scavenging part. 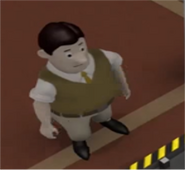 A front view of Ted's 3D Model, seen in the scavenging part.

Ted outside his house, prior to the explosion, seen in the trailer. 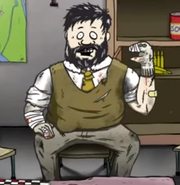 Ted seen on the Right along with Timmy, Mary Jane and Dolores in early concept art for the Bunker. 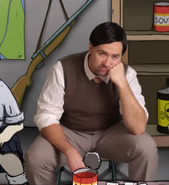 Ted in the trailer for the 60 Seconds! Nintendo Switch port. 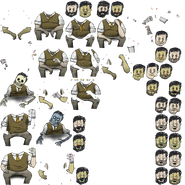 Ted's model when Dolores is scavenging.