2
Timothy McDoodle[2] is one of the main characters in 60 Seconds! He is the son of Ted and Dolores, and Mary Jane's younger brother.

Timmy appears to be around 11 or 12, but the player can see two photos of a younger Timmy in the scavenging part of the game.

Timmy is shown to be the best at scavenging out of all the characters, since he comes back to the fallout shelter the fastest, and is able to scavenge for more items.

Timmy is a short and skinny boy with ginger hair and a spaced out face. He wears grey suspenders, brown shorts, and white socks with grey slippers.

He looks strikingly like his mother, Dolores; in contrast, his sister, Mary Jane, has almost all of their father's features.

Timmy noticed his old telescope in a pile of rubble on the other side of the street. He got really excited about stargazing again. After all, the night sky is one of the very few things that still look about the same after the blast. Should we let Timmy go out and stare pointlessly at the sky?

If Yes: Timmy came back claiming he saw a mustached man on the moon... (effects unknown)

Timmy prepared a short message to be transmitted tonight. There's a few options on how it could be done, so let's try to pick the best one. Or just back out completely - it's not too late to give up on the idea.

Harmonica: Timmy went out and climbed the highest point he could find, which in our situation turned out to be an overturned truck with two more cars stacked on top of it. Probably not the safest place to be, but he managed to transmit the message successfully and return safely, now we wait....

When Timmy is caught reading comic books with soviet propaganda in them you are given the choice to banish him out in the wasteland, he will then appear dead if you choose to banish him.

Timmy in the scavenging part.

Timmy and Ted packing supplies in a suitcase in the 60 Seconds! DLC countdown (6).

Timmy exploring the wasteland in the DLC "What's in the Suitcase?" (5). 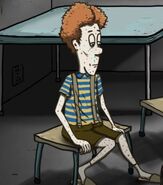 Timmy hiding from bandits in the 60 Seconds! DLC countdown (4).

Timmy and a group of survivors arriving at the shelter in the 60 Seconds! DLC countdown (2).

Timmy in the fallout shelter alone.

A photo of Timmy in his scout hat. Also a picture of the book showing Timmy healing Ted of his wounds.