Tape
Tom Thomson is one of the six known main characters in 60 Parsecs!. During the scavenging part of the game, he has four inventory slots to carry supplies. When another character is scavenging, he takes up two slots. His foot will be seen stuck in a bucket, causing him to be unable to walk to the shuttle.

Tom Thomson seems to be a middle-aged man in his mid to late 40s. He has brown hair (which he claimed to be formerly blond), an eyepatch on his left eye and a badge made out soup can parts in his spacesuit. His suit is yellow with navy blue joints and a white collar. He also wears cream coloured gloves and brown boots. His hair and beard will grow as the game continues.

Everyone's first impression of Tom Thomson is that of a decorated major: brave, courageous, a man who has seen it all. Sporting a dastardly eye patch and a coat of once-magnificent blonde hair, Tom believes to be everyone's dream come true, and the personification of the American hero. Except, none of this is true.

Tom Thomson was a dreamer from an early age. He developed a vivid imagination as a child, reading any fiction book he could find in the local library. The books filled his head with stories of greatness, daring explorers of the unknown, not afraid of anything or anyone. Enchanted by these vision, he wants to be the First Galactic Adventurer and lead a thrilling, action-filled life.

Boost: Hoarder [Random chance for Tom to get Items.]

Tom as seen from the space station. He seems to have a bucket stuck to his foot. 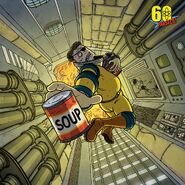 Tom Thomson attempting to grab a can of soup in the 60 Parsecs! Promo picture.

Tom both starving and insane. 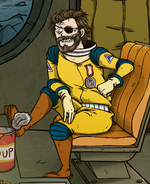 Another sprite for sick Tom. 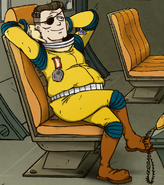 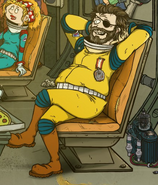 Another sprite for vigorous and well-fed Tom. 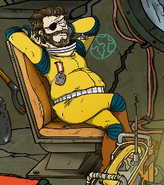 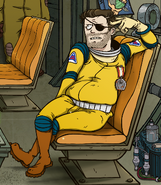 Tom's ending description if he becomes the soulmate of a male captain.

Tom's ending description if he becomes the soulmate of a female captain.

The eyepatch and soup can badge Tom is represented by when he dies.

Tom as a bandit in the evil dog ending.

Tom in the ending where you use the lighter to fix Sheila but you don't tell the truth to Dumbo.

Tom in the ending where you successfully get rid of Sheila's feelings for Dumbo or make Dumbo fall in love with Sheila. 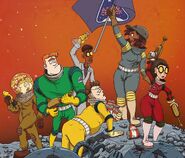 Tom Thomson and the rest of the crew featured in the Mission: April One announcement.

Tom in his special Mission ending.

Tom in the coverart of his mission "Alone Among the Stars"
Community content is available under CC-BY-SA unless otherwise noted.
Advertisement